Muhammad was Islam’s founder and prophet. He was born in April of the year AD 570 in the city of Mecca. Life was fierce on the Arabian Peninsula; desert tribes fought over scarce resources. High birth rates were necessary for survival. Child marriage was the norm. Females had no say in the affairs of society; males used them for child-rearing, homemaking and sexual pleasure. The eye-for-eye tooth-for-tooth law of retribution prevailed. Blood feuds were common. Polygamy and idol worship were pervasive; Arabs in the region worshiped hundreds of different gods and goddesses. Visitors could worship their personal idols at the Ka’bah, a black cube-shaped structure in the heart of Mecca. 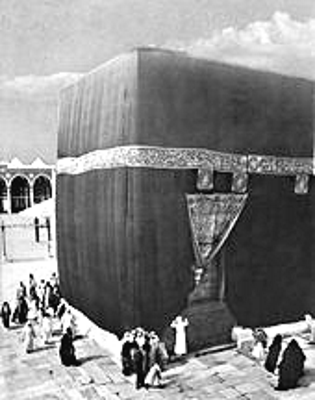 Arabs of that era were tolerant of all religions; Jews and Christians coexisted peacefully with their Arab neighbors.

Muhammad’s tribe, the Quraysh, was the wealthy ruling family of Mecca. It was responsible for maintaining the Ka’bah, which housed 360 different idols. The Quraysh exacted access fees from worshippers and sold religious artifacts. Muhammad’s father’s name, “Abdullah,” means “slave of Allah.” Allah was the moon god and chief idol of the Quraysh tribe. Allah’s symbol, the crescent moon, later became the universal symbol for Islam. Muhammad was still in his mother’s womb when his father died. Muhammad’s mother died when he was six and he was given over to the care of his paternal grandfather. His grandfather died when Muhammad was eight and he was given over to his uncle, Abu Talib.

As a boy, Muhammad tended sheep until he began traveling with his uncle Abu Talib, a caravan trader. Muhammad surely met people of diverse faiths in Arabia, Syria and Yemen.

Working in the caravan trade, Muhammad earned a reputation for fairness and excellent business practices. On several trading ventures he earned a good profit for a wealthy widow named Khadija. She was 40 years old, four times divorced and had children. She asked Muhammad to marry her. The year was AD 595 and Muhammad was twenty-five years old.  Khadija gave him two sons, but both died in early childhood. She also gave him four daughters, all of whom lived to adulthood.

One day, when Muhammad was forty, he claimed the angel Gabriel appeared to him in a dream and told him, “Read! (or Proclaim!) in the name of your Lord and Cherisher, Who created man out of a (mere) clot of congealed blood. Proclaim! And your Lord is Most Bountiful, – He Who taught (the use of) the Pen, – Taught men that which he did not know.” Muhammad awoke from this dream thinking he had gone insane. He ran to Khadija for comfort and guidance. She covered him with a blanket and calmed him down. She told him that rather than being insane he was a prophet. Muhammad believed her and began preaching on the streets of Mecca. The year was AD 610 and it marked the founding of Islam.

As Muhammad’s visions continued he steadily elevated himself from Messenger to Apostle of Allah, then to last in the line of biblical prophets, then second only to Allah. He claimed Gabriel’s revelations to him were word-for-word, directly from Allah, and that Gabriel was the same angel who announced to Mary that she would give birth to Jesus. Not one of Muhammad’s family, friends or associates ever claimed to have seen this angel. Nevertheless, Muhammad continued reciting his ‘revelations’ on the streets of Mecca and wherever he traveled.

Muhammad forbade images of any living thing in his home—saying that no man should ever attempt to imitate Allah’s creations. He hated poets and artists; he promised artists they would burn in hell until the living beings in their paintings came to life. Many of Muhammad’s idiosyncrasies gradually, over centuries, became part of Islamic doctrine.

When Muhammad began preaching against the idols in the Ka’bah, his tribe, the Quraysh, began causing trouble for him. They insulted him and threatened him. Quraysh poets made fun of him.

Muhammad continued to preach that he was the Prophet and Messenger of Allah—the Creator, the One True God, all-powerful, invisible and unknowable. Although he had offered money and gifts to illiterate pagans if they would accept his claims, after thirteen years he had only 150 converts. Religious Islam failed.

In 619, Muhammad’s wife Khadija and his uncle Abu Talib both died. Within a month of Khadija’s death, Muhammad had married a widow named Sauda and had become engaged to Aisha, the six-year-old daughter of his father-in-law, Abu Bakr. He consummated the marriage when Aisha was nine, and she became his favorite wife.

Muhammad refused to stop his preaching against the idols in the Ka’bah, and Quraysh persecutions became more intense. They spit on him, threw animal intestines on him, harassed his followers and threatened to beat him. Finally, they plotted to assassinate him. Muhammad learned of the plot and in June 622, he and a small band of followers fled Mecca and migrated 200 miles north to Yathrib, present-day Medina.

Two Arab tribes in Yathrib had been engaged in a blood feud for years. Muhammad, having a reputation for fairness, was asked to settle the feud. He did so and in the process gained quite a following. He was soon asked to adjudicate disputes among local tribesmen, and he agreed.

As Muhammad’s power and influence increased, his “revelations from Allah” became increasingly timely and convenient. Allah began to grant special favors to satisfy the desires of his prophet. For example, after Muhammad had married Allah’s permissible number of four wives but lusted for more, Allah revealed that the prophet could have as many wives as he wanted (Qur’an 33:50-51).

According to Islamic tradition, Allah never increased his original limit of four wives for any Muslim other than Muhammad. However, the Qur’an encourages Muslim married and unmarried men to follow the example of Muhammad, who would convert, enslave or kill captured infidel men—and rape, enslave or sell captive widows, orphans and young girls. Today, Islamic jihadists still use these barbaric tactics.

Muhammad had never mentioned jihad during his thirteen years of preaching in Mecca. Only after migrating to Medina and becoming a political leader and powerful military commander did Muhammad order his followers to attack and plunder nomadic tribes. Many of his victims were illiterate Bedouins. Desert resources were becoming scarcer, and it was clear that only the larger and stronger tribes would survive. Weaker tribes soon surrendered. Muhammad’s growing army was thereby strengthened because every tribe protected itself with fighting men. Muhammad began claiming for his own the most beautiful females captured in battles, and sometimes took them into his tent immediately after his men had murdered their husbands and fathers. Militant Islam was succeeding.

It will never be known just how many of Muhammad’s contemporaries believed he was receiving revelations from the “Creator of the Universe.” Obviously, some balked at fighting because Muhammad soon claimed this revelation: “Allah will forgive the sins of those killed while fighting and give them immediate entry into paradise.” He said Allah will also forgive the sins of those wounded while fighting and receive them into paradise when they die. Muhammad promised Allah would give slain or wounded fighters thrones, servants, fruits, wine and beautiful virgins of like age for their eternal pleasure. In addition, Muhammad promised recruits that fellow Muslims would care for their families if they were killed or wounded.

Having established his hold over the Arab tribes in and around Medina, Muhammad turned his attention to the Jews. He believed they would support his cause and become powerful assets.

At that time, AD 622, Jews comprised half of Yathrib’s population. Jewish craftsmen were well-known for the quality of their knives and swords and profited from their sale. The Jews were also excellent farmers. They were wealthy, well-respected and lived peaceably with their Arab neighbors.

Given their wealth and enduring theology, he expected them to become persuasive missionaries for Islam. He hoped they would debate other Jews and even help him convert the Quraysh in Mecca.

As long as Muhammad thought Jews might become his allies, Allah’s revelations were favorable to them. Muhammad began telling stories about biblical prophets they had known since childhood. More Jews came to hear him preach. Muhammad continued to flatter them, trying to win them over. However, the Jews soon detected discrepancies in Muhammad’s stories and began to challenge him. Muhammad, not accustomed to being questioned, arrogantly stuck to his misconceptions. The Jews, of course, did not back down from what they knew to be true. They began to ridicule Muhammad’s false proclamations and mock his every mistake. Then, not surprisingly, Muhammad claimed to receive revelations from Allah saying the Jews were corrupt, deceitful and evil. He began to claim more hateful and forceful revelations. For example, “Slay them wherever you find them….” (Qur’an 2:191) and “…strike terror into the hearts of the enemies” (Qur’an 8:60).

Muhammad then claimed to have received revelations that Allah despises Jews. Muhammad commanded his soldiers to dig a trench in the middle of town. He had the Jewish men and boys with pubic hair led out to the trench in groups of five or six and forced to kneel. Then Muhammad’s soldiers cut off their heads and pushed their bodies into the trench. Muhammad and his 12-year-old bride, Aisha, sat and watched all 800 die in a single day. He then divvied up the murdered Jewish men’s property, possessions, wives and children with his soldiers as spoils of war, keeping 20 percent for himself.

Attacking Jewish communities proved so lucrative that Muhammad and his military commanders continued this practice. Fighting, conquering and plundering was established as Islam’s primary means of expansion for the next 1,200 years.

The safety of belonging to a large and powerful tribe and the expectation of receiving substantial war booty attracted more desert Arabs to side with Muhammad.

Muhammad’s thirst for land and power continued to grow with each successful attack on nearby tribes and villages. He established rules of warfare that are still in use today: he would ask a tribe to convert to Islam and give pagans two choices—convert or die. He would give Christians and Jews three choices—convert, die or become a slave to a Muslim overlord and pay an impoverishing tax (the jizya) while being humiliated. Muhammad would execute on the spot those who refused to convert or accept his offer of slavery.

Accounts of Muslim military exploits fill volumes. Muhammad led the first Islamic attack on the world in January AD 624. Six years later, in AD 630, he led his army to conquer Mecca. For the rest of his life he led military campaigns to conquer more territory. Before his death he had conquered the entire Arabian Peninsula and laid plans to conquer lands beyond. On his deathbed, he ordered the expulsion of Jews and Christians from the Arabian Peninsula. The year was AD 632.